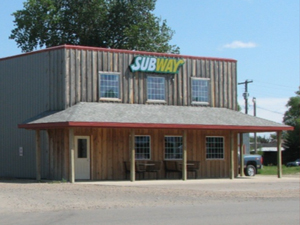 Proven management and ownership abilities were a key selling point for First District Development Company and Plains Commerce Bank in Aberdeen, South Dakota, when considering Carisa Giblin’s loan application. Carisa proposed to purchase an existing building in Miller, SD, and renovate it to operate as a Subway. Through the merger of an SBA 504 loan via FDDC and a conventional bank loan through Plains Commerce Bank, Carisa Giblin was able to turn her dream of expanding her Subway business to Miller a reality.

In 2014, Carisa Giblin took over management and ownership of the Subway in Redfield, SD. Prior to that, Carisa was involved in management at the Subway in Mitchell, SD. Simultaneously to having the Subway in Redfield, Carisa also worked full-time as the Clinic Manager at Redfield Community Memorial Hospital. Since starting the Subway in Miller, Carisa resigned her position at the hospital and now is focusing her full efforts on her two Subway stores. Carisa, who resides on an acreage between Redfield and Miller, saw Miller as the perfect location to open another Subway. Miller, which is centrally located for many travelers in South Dakota, had only one fast-food establishment. As soon as the small community of 1,500 caught wind of Subway coming to town—the town was buzzing with the exciting news. Carisa received a lot of positive feedback to her Miller Subway before the official purchase was actually made.

Indeed, the buzz was spot-on, because when Carisa opened the doors to her Miller Subway in March 2016—the restaurant was received very well by the community. Carisa feels fortunate for the warm welcome to the town and also for the exceptional team of employees and the sensational manager she’s found in the community.

At the Subway in Miller customers are greeted by name. More times than not, the team there will know what a regular customer is going to order and particularly how they would like it prepared. Currently, Carisa is having a drive-thru system installed, which will only increase the convenience for the Miller Subway customers.

Carisa takes pride in her Subways. She makes sure her restaurants are kept clean and she pays close attention to make sure the employees and management act professionally and appropriately when she’s present at the store and when she’s not. With Subway’s constantly changing menu, the clean establishment, and top-notch employees, it’s no wonder Carisa’s Redfield Subway constantly reports increasing sales and has received recognition from the Franchise World Headquarters. When Carisa took over the Redfield Subway, she made major changes in employees on staff and changes to the way the entire restaurant was kept and operated.

Carisa enjoys being part of the Subway franchise, as she enjoys the food the franchise offers, and the franchise has good people who are easy to get along with. Her favorite part of owning and operating her own Subway is having the opportunity to meet the people, both employees and customers.