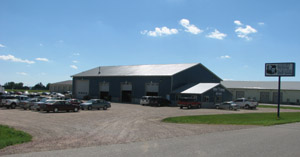 In March of 2011, Terry and Amy Reilly opened Highway 20 Service, Inc. as an auto repair shop along with a gas station on North Highway 20 in Watertown, SD. The Reilly’s leased spaced at this location, which included three bays with very limited parking available. Prior to opening their own shop, Terry worked in automotive sales and service since 2007 and Amy previously worked with accounts and customers. Operating their own shop was a good fit for them, as Terry oversees the shop and Amy handles the office functions.

Since opening, the Reillys gained clientele with many repeat customers. Their excellent repair work and service helped to give them name recognition in the industry. As their business grew, they became cramped for space both in their shop area and in parking. Fortunately, a building became available in 2016 with more bays and a larger shop area. The building would allow the Reillys the space they needed to eliminate down-time for their mechanics while waiting for parts or working on more timely jobs. The new facility includes five acres which would solve their current parking problems as well.

Plains Commerce Bank in Watertown, SD, along with First District Development Company and the SBA 504 Loan program assisted Terry and Amy Reilly with an attractive financing package to complete their purchase of this existing building. The facility was a necessity for the continued growth of the business.

The additional space and location has proven beneficial as the Reillys indicate that business has increased more than projected. Their expanded customer base may be attributed to the additional room and visibility at their new location on Highway 212 in Watertown. Also, without the presence of gas pumps, it has allowed Terry and Amy to focus on auto repair which was always their main interest. With the change of location came a change of name for the business as well, they are now known as Reilly Repair, Inc.