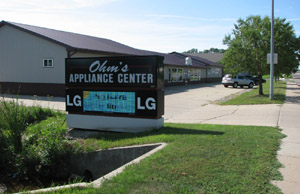 BankStar Financial, Brookings, SD, and First District Development Company (FDDC) were able to combine a commercial bank loan and an SBA 504 loan to offer an attractive financing package to Michael and Tanya Smith. The Smiths purchased the building they were renting for their business, Ohm’s Appliance Center, which is located on South Main Avenue in Brookings. Because the Smiths pursued an SBA 504 loan, they were able to accomplish their purchase with a minimal equity injection and receive a low, 20 year fixed rate on the SBA portion of their financing.

The business, in existence since 1973, owned by Ronald and Wanda Tyler, began under the name “Tyler TV and Appliance.”  At that time, they specialized in television and appliance sales and repair. In 1995, the business was sold to Kevin Ohm and was renamed “Ohm’s Tyler TV and Appliance.” During the 2000’s, due to the decline in TV repair, the store decided to stop selling televisions and focus entirely on appliances. Then in 2004, the store was relocated to its current location, a larger facility, on South Main Avenue in Brookings. With the change in location and products offered, came a name modification, “Ohm’s Appliance Center.”

Michael Smith began working for Ohm’s Appliance Center in sales and has been with Ohm’s since 2006. In 2011, Michael and Tanya Smith purchased the business from Kevin Ohm, but continued to rent the building that housed Ohm’s Appliance Center. When the opportunity arose to purchase the existing building to own versus rent, Michael and Tanya Smith took advantage of the attractive financing package provided by BankStar Financial and FDDC. Ohm’s Appliance Center provides all appliance needs as they sell the following brands: Amana, GE, GE Café Series, GE Profile Series, HotPoint, LG, Maytag, Speed Queen and Whirlpool. Customers can purchase appliances to supply their cooking, cleaning and refrigeration needs in one stop. Ohm’s is open six days a week.

First District Development Company was happy to assist the Smiths and partner with BankStar Financial on an SBA 504 loan. FDDC wishes Ohm’s Appliance Center continued success in their business venture.

Ohm’s Appliance Center… your first class appliance sales and service agency serving eastern South Dakota and the surrounding area. We deliver and install your appliances for you and we will be here with the trained technicians and factory parts to keep this vital equipment running long after the sale.