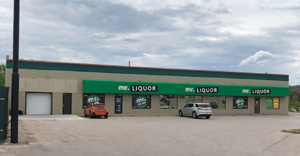 Taking advantage of the SBA 504 program’s current record-low interest rates is Mr. Liquor in Rapid City, South Dakota. First District Development Company and Black Hills Federal Credit Union, Rapid City, paired up to offer Jason Dvorak an attractive commercial loan package for his latest business venture — the purchase and remodel of an existing building, and the purchase and installation of new furniture, fixtures, and equipment to open the doors to Mr. Liquor.

Jason Dvorak is no stranger to the world of retail business, as he has been involved in management and ownership of three convenience store / gas stations in the Rapid City area for almost 15 years. In recent years a liquor store on the West side of Rapid City had closed its doors in conjunction with a grocery store closing. Seeing the need and opportunity for a successful liquor store, Jason found a vacant building listed for sale in a perfect location at the intersection of Sturgis Road and West Chicago Street (Highway 231) in Rapid City. Another important item for this venture was a name for the business. The business formerly operating out of the building was Mr. Movies—so naturally, for internal purposes Jason called his new project Mr. Liquor and it stuck! This name is not only catchy and nostalgic for the locals, but by naming the business Mr. Liquor, Jason saved money on signage by putting a type of signage sticker LIQUOR over the former “movies”.

After the renovations were completed to the building, there is no resemblance remaining of a movie rental store. The floors in Mr. Liquor have been redone and are now sealed concrete and kept impeccably clean. There were a number of other improvements made to the building from new plumbing, electrical, cabinetry, window tinting, and signage—to one of the most appealing features for its patrons—the massive beer cave. Mr. Liquor’s Facebook page boasts the store has the “most complete beer selection in Western South Dakota in the largest beer cooler in the Black Hills”. In the beer cave customers revel in the huge selection of cold beer, including craft beers and hard seltzers. In addition to beer, Mr. Liquor’s customers enjoy browsing the 28 coolers and over 200 feet of shelving to find their old favorite wine and liquor or to find a new one they’ve never seen or tried before, all sold at competitive prices.

Mr. Liquor is open seven days a week. The business features a wide variety of fun extras for its customers, such as: beverage tastings, drawings for prizes, monthly, weekly, and daily special pricing, and Mr. Liquor always seems to have the newest released beer, wine, and liquor products on their shelves. In fact, in early July they had a line of customers forming to purchase a highly sought after product that doesn’t stay in stock for long—Crown Royal Peach. Of course the friendly staff at Mr. Liquor implemented social distancing practices at this time to keep their customers and themselves safe! Mr. Liquor offers a Loyalty Program to its patrons so they can get in on special drawings and perks.

As one can imagine, the COVID-19 pandemic has not adversely impacted the liquor store industry. Through research Jason obtained, he learned South Dakotan’s are consuming the same amount of alcohol as they always have. Instead of the pre-COVID-19 quantity consumed at bars and restaurants, that same amount is being consumed at home.

As shown in the photos, Mr. Liquor is a clean and very well stocked liquor store. This was a fun project for FDDC and Black Hills Federal Credit Union to partner on. Both lenders wish Jason and his Mr. Liquor team continued success!