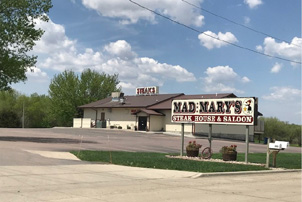 Mad Mary’s Steakhouse is located in Flandreau, South Dakota, and overlooks the Big Sioux River. The steakhouse has been a staple in the Flandreau community since it was built by Myril Arch in 1993. In 1993, the restaurant was known as the Cattleman’s Club. The restaurant changed hands in 1999 and became known as Mad Mary’s. Randall and Diane Tiedeman then became the owners of Mad Mary’s in 2008.  The Tiedeman’s expanded and improved the facility, while ensuring the restaurant provided quality food and service during their ten years in ownership.

When the Tiedeman’s were looking to retire from owning and operating Mad Mary’s, it made complete sense when a long time employee and her husband wanted to purchase and take over the reins at Mad Mary’s. Christina Schmidt has worked in various roles at Mad Mary’s Steakhouse since she began working there in 2006. In 2017, Christina became the manager of the restaurant to prepare her for her new role in ownership.   Christina and Daniel Schmidt purchased Mad Mary’s in February, 2018, with the assistance of the SBA 504 program through First District Development Company (FDDC) and a commercial loan financed through Dacotah Bank in Brookings.

Mad Mary’s has set itself apart from the competition in providing their customers with wonderful service and food that is consistent and full of flavor. The restaurant is open to the general public seven nights a week and its menu features high quality steaks, seafood and a full service bar. The facility also has a newly renovated banquet facility located in the lower level of the restaurant to host holiday events, wedding receptions, and other special events to meet their customers’ needs.

Wayne Avery, Senior Business Banker at Dacotah Bank, added his thoughts on the project, “Daniel and Christina Schmidt were able to take advantage of a unique opportunity to purchase a well-established business that had been recently updated and expanded. The purchase involved a significant investment in fixed assets. The purchase was made possible using the combined resources and support of First District Development Company, the Small Business Development Center and SBA.  It was gratifying for me and my Dacotah Bank team members to say ‘yes’ we have a way to make this work.”