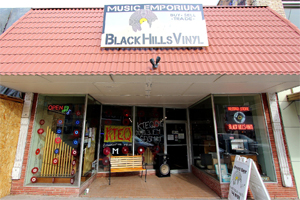 Michael and Jennifer Calabrese found their passion for vinyl records while living in Boulder, Colorado. Collecting vinyl records started out as a hobby and according to Jennifer, “We just fell in love with vinyl and started collecting in a big way. We picked up albums for a dollar in thrift stores, garage sales, antique stores, just everywhere.” As their passion, and their collection, grew; the couple began selling records online with the hopes of one day owning their own record store.

After seeing the for-sale ad for Black Hills Vinyl online, Michael and Jennifer decided to visit the store in Rapid City. “We fell in love at the sight of it,” Jennifer said, and the couple purchased the business in 2015 from the original owners. Jennifer has been the store manager since the change in ownership took place.

Black Hills Vinyl opened in 2012 in Rapid City, South Dakota, selling new and used vinyl and turntables. The business moved to its current location, 622 Saint Joseph Street, Rapid City, in 2016.  After leasing the space for several years, Michael had the opportunity to purchase the real estate. Black Hills Federal Credit Union in Rapid City, South Dakota, and First District Development Company via the SBA 504 loan program, paired up to provide Black Hills Vinyl with the necessary financing to purchase the property. With the SBA 504 loan involved, the business was able to obtain a low, fixed interest rate with a 25-year term.

Michael and Jennifer have expanded Black Hills Vinyl’s product offerings to include CDs, cassettes, equipment and accessories, and disc golf supplies, as well as, new and used vinyl records.  In addition, Black Hills Vinyl hosts live music throughout the year. Michael and Jennifer love having the opportunity to talk music with people all day. According to Michael, “People teach us a lot. Older folks come in with a wealth of knowledge to share and the younger kids know all the hipper things.” In addition to locals and tourists who shop in-store, Black Hills Vinyl ships products to vinyl enthusiasts across the United States.